At 3:22 PM CEST (9:22 AM EST) on Friday, July 22, 2011, a car bomb exploded outside the Regjeringskvartalet in Oslo, Norway.  The Regjeringskvartalet is a collection of Norwegian governmental buildings, including the office of the Norwegian Prime Minister.  The explosion damaged large portions of the buildings, killing 8 and injuring 30.  About an hour and a half later, a man dressed as a police officer opened fire on participants of a Labour Party youth camp on the island of Utøya, killing 69 and injuring 66.  Norwegian police then arrested this man, who turned out to be 32-year-old Anders Behring Breivik, an ethnic Norwegian.  Breivik has admitted to committing both attacks.

As soon as it was confirmed that the attacker was an ethnic Norwegian instead of one of their pet minorities, the media delightedly fell all over themselves to label the attacker as a “conservative Christian” and a “right-wing extremist.”  Wikipedia describes him as a “nationalist” and a “right-wing extremist.”1  Due to the media’s mislabeling of Jared Loughner as a right-wing extremist and anti-Semite, when he was in fact a left-wing Jew, I was immediately suspicious of these claims – and it turns out I was correct.  The claim that he was a conservative Christian is based largely2 on a brand new Facebook page, which appeared immediately after the attacks, displaying “conservative” and “Christian” as his beliefs.  Putting aside this laughably convenient fact, common sense would indicate that anyone interested in politics and religion enough to write a 1,500 page manifesto might have something more descriptive than those generic terms.  For example, I have “Reformed Protestant” and, half-jokingly, “Farther Right-Wing Than You” as my religious and political beliefs on my Facebook page; and most of my friends who are interested in those subjects have similarly descriptive labels as well.  Beyond this anecdotal evidence, when we look at his manifesto, we see a belief in Darwinism, rationalism, and a nebulous cultural Christianity, but no profession of the Christian religion itself:

As for the Church and science, it is essential that science takes an undisputed precedence over biblical teachings. Europe has always been the cradle of science, and it must always continue to be that way. Regarding my personal relationship with God, I guess I’m not an excessively religious man. I am first and foremost a man of logic. . . .

I’m not going to pretend I’m a very religious person, as that would be a lie, I’ve always been very pragmatic and influenced by my secular surroundings and environment.3

He may have some residual cultural Christianity, but he is not a Christian – and certainly not a “Christian fundamentalist,” as some of the media is claiming.  Further, he is a Freemason, which puts him even more at odds with true Christianity.

The claims that he is “far-right” or a “right-wing extremist” are false as well.  He certainly has some right-of-center views; however, when you really examine them, you see that they are not truly right-wing.  Breivik is staunchly pro-homosexual, pro-civic nationalism, and pro-Israel.  He is extremely opposed to Islam, multiculturalism, cultural Marxism, and the Frankfurt School, in addition to ethnocentrism and “racism.”  In fact, he comes right out and says, “[W]e have to ensure that we influence other culturally [sic] conservatives to take our anti-racist, pro-homosexual, pro-Israeli line of thought.”  Not only does this have little in common with my own right-wing Christian ethnonationalism, but it is filled with internal contradictions.  For example, his support for homosexuality puts him in the position of opposing Christianity and supporting cultural Marxism.  Being opposed to both multiculturalism and ethnocentrism, in favor of civic nationalism, is an untenable position, most especially in a multiracial country.  Further, as Kevin MacDonald points out, Breivik correctly rails against cultural Marxism and the Frankfurt School as playing a leading role in the destruction of Europe, but ignores the fact that these are disproportionately Jewish creations; he has internalized the schizophrenia of neoconservatism, irrationally choosing to support the ethnocentrism of Israel and Zionism, while denying the legitimacy of ethnocentrism among his own people. A rational nationalist would not support Jewish ethnocentrism to deal with Islam in Israel unless such support were reciprocated by the Jewish community in Western countries.  Instead, Jewish groups have been at the forefront of denigrating the moral legitimacy of European nationalism while hypocritically supporting ethnocentrism for Israel.  Indeed, Brevik had internalized neoconservatism so thoroughly that it is now apparent that the Labour Party’s opposition to Israel and the Utøya youth camp’s recent endorsement of Palestinian statehood are very likely reasons that they were targeted.4 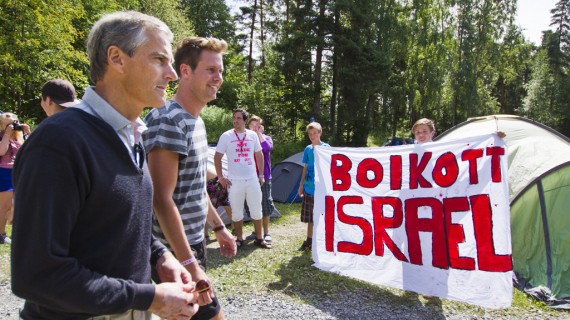 Additionally, Breivik’s attacks fall on the 65th anniversary of the Zionist King David Hotel bombing, and Breivik was a regular poster on a neoconservative Zionist website.

The man who runs it is a Billy Kristol style neo-con. It is called document.no and run by Hans Rustad, a Jewish man. Rustad is a former left-wing journalist turned neo-conservative. The website claims that only Muslim immigration should be restricted and that Asians and non-Muslim Africans are “making a positive contribution to Norway.” The website fanatically supports Israel and opposes Norwegian recognition of Palestinian statehood.5

Cultural Christianity, civic nationalism, anti-racism, and Zionism mixed with anti-Islam is the ideology of neoconservativism, not the ideology of the far right.  Breivik was basically a liberal Republican, not a right-wing nationalist.  If Breivik and I had ever met, it is almost certain that we would have been completely unable to work together towards any political goals due to our opposing ideological foundations.

His neocon beliefs notwithstanding, Breivik did have some things correct.  Islam and cultural Marxism are extreme dangers to traditional European culture, Christianity, and the European peoples.  He also correctly identifies the enemies of the West as not only the third-world immigrants, but also our own elites who have crammed multiculturalism, cultural Marxism, Islamization, and mass third-world immigration down our collective throats.

Moreover, I will not denounce political violence as inherently wrong. There are times when violence is completely legitimate for the achievement of political ends.  That being said, I do not believe that Breivik’s actions fall into this category. When violence is legitimate and when it is not will be covered in detail in the future in my ongoing Vindiciae series, so I won’t address it at length here. However, I want to make clear that I do not endorse what Breivik did.  He is a murderer.

While I cannot approve, I can certainly understand why he did it.  Before the 1970s, Norway had very little immigration.  Starting with refugees from Cambodia and Vietnam in the 1970s, the rate of entry and number of  immigrants has continued to increase.6  Norway currently has over 300,000 non-Western immigrants (plus another 200,000 immigrants from other European countries).7  These immigrants are concentrated in the cites; for example, Oslo is 27% immigrant and Drammen is 22% immigrant.8  For the past five years in a row, 100% of all violent rapes committed in Oslo were committed by non-white immigrants, primarily against ethnic Norwegians.9  The current governing coalition, led by the Labour Party, has greatly accelerated this, letting in 143,000 immigrants from 2005 to 2009, a total increase of 41%.10  As we can see, we have a man who has watched the city were he grew up, Oslo, turn into something unrecognizable by thousands of non-white immigrants who brutalize white women and seek to impose Islam on his country. All of this is supported by his own political ruling class and against his wishes.  Breivik’s targets were not random.  The building in front of which he blew up a car housed the Labour Party’s Prime Minister, and the youth camp he shot up contained the next generation of Labour Party elites. I am not condoning his actions, but he is definitely not insane as some people, including his lawyer, are claiming.  As Hunter Wallace put it:

Anders Behring Breivik isn’t a lunatic. This isn’t an obvious schizophrenic in the mold of Jared Loughner.

This is someone who clearly understands the gravity of the situation and who was disturbed enough by what is being done to his country and his civilization to take matters into his own hands. . . .

As Whites are pushed into minority status in Europe and America by their own “leadership,” it is inevitable that people like Anders “The Incorruptible” Breivik here will start fighting back. This is what the French Revolution looked like when Louis XVI and Marie Antoinette lost their heads.

The treasonous Western elites have pushed us, and pushed us, and pushed us. Did they really think that they could go on doing that indefinitely with no blowback?  The elites and the media are already clamoring to take away more of our peoples’ gun rights, free speech, and freedom of assembly in the wake of these attacks; but that will only make things worse.  Everyone has a breaking point, and the more they push us into an ethnocidal corner, the more people are going to snap.  When liberal Republicans and neoconservatives like Breivik start snapping, then the elites definitely have something to worry about.