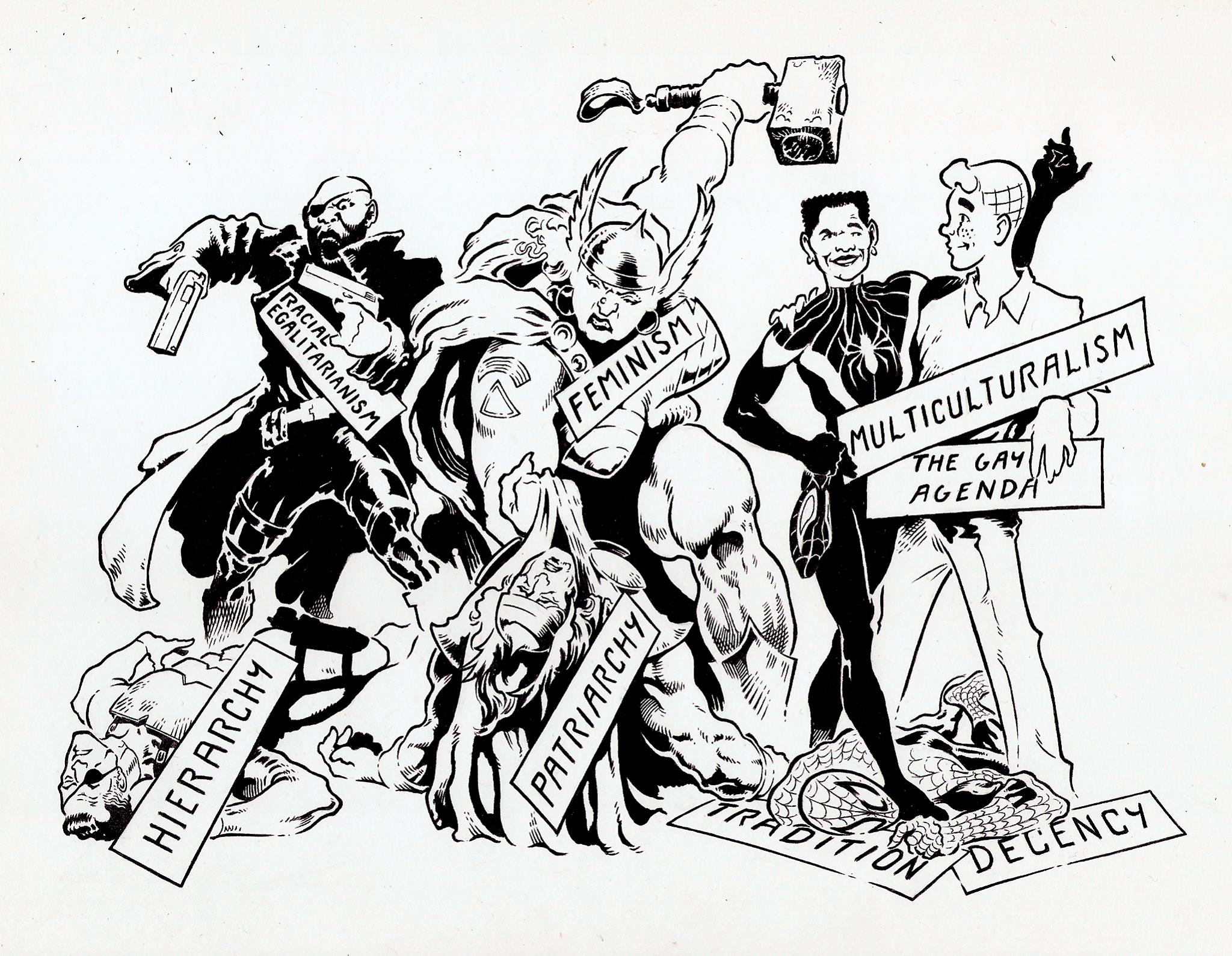 The multicult revolution imposed on American society continues its long march through the institutions – and at this point with scant resistance. Though the comic book medium in America was, from its inception, a self-consciously subversive enterprise, the agenda has in recent months been kicked into overdrive, as many of the characters which were once meant to play to WASP society have been rewritten as diversity icons.

Due to the unignorable storming of the silver screen by comic heroes in recent years, internet chatter on the subject surpasses the realms of comic geekdom.

Here’s a short list of recent multicultural enrichments of the genre:

1. Batwoman, who used to be a White heterosexual, was recently revamped as a Jewish lesbian. Gotham city is apparently more of a hellhole than we knew.

2. Nick Fury, a gristly mainstay of the Marvel universe, was a few years ago suddenly re-imagined in comic books as a Black. The Avengers movie franchise followed suit shortly thereafter, casting Samuel L. Jackson in the role of Fury. They considered the change of his ethnicity an “improvement.” That speaks volumes in itself, doesn’t it?

3. Green Lantern, aside from coming out as a sodomite, has appeared in recent editions as an African. Why? Because you can’t have a straight White guy representing earth in intergalactic affairs. You don’t want aliens thinking we abide by any definable ethics, do you?

4. Heimdall (known in Norse mythology as the ‘whitest of the gods’) was without explanation portrayed as a Black in the Thor movie franchise. There was some outrage at this from the comic purists and mythology buffs, but it was a tempest in a teapot. Even if critics asked why Marvel felt the need to alter a character with such a long history in such a huge way, they were easily silenced by counter inquiry, “Why would you care, unless you’re a racist?”

5. Hogun, another of the Asgardians, was also inexplicably portrayed as some variety of Oriental in the Thor movies.

6. Spider-Man, who has always been White, was recently killed and recast as a Puerto Rican/Negro mix. And I’m not sure if they settled on the issue or not, but there has definitely been a lot of chatter about him possibly being a bisexual.

7. Archie, the image of clean-cut cheesecake Americana, not only sired a mixed child out of wedlock, but in recent issues, sacrifices his life to to save a sodomite senator pushing gun control from a conservative/Christian assassin.

8. Thor, who is not only a comic icon, but a cultural icon well prior by way of Norse folklore and America’s deep Germanic roots, is now being recast as a woman. From what I’ve read, the writers are emphatic that they aren’t casting her as Thor’s sister, or a female clone, or any other sidestepping cliche, but Thor himself. Thor is now a woman. And thereby, that stubborn image of White masculinity is neutralized by absorption into the new LGBT pantheon.

9. Captain America is also being recast as an African. Why? Because, even if he was originally written as the consummate enemy of the Nazis, he can no longer be tolerated as an American icon. Let’s face it, as a blond-haired, blue-eyed super-soldier, he cannot be much different from the Nazis himself. Frankly, Marvel comics is just rather embarrassed by him at this point.

This is by no means an exhaustive list. Though I read my share of comic books as a child, I have no special interest in enumerating the array of X-Men and others who over the years have been tailored to the LBGT agenda, the race-mixing agenda, or what have you. I mean merely to note this recent and most far-reaching cultural cleansing underway in comics. The racial and cultural purge which is transmogrifying characters not to any singular identity, but away from a singular identity – straight, White, traditionalist patriarchs – makes plain their motive: they deem those attributes no longer heroic or idyllic, but villainous.

The latest round of purges, then, are merely dispensing with pretenses.