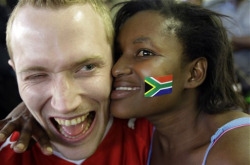 “For the invisible things of him, that is, his eternal power and Godhead, are seen by the creation of the world, being considered in his works, to the intent that they should be without excuse: Because that when they knew God, they glorified him not as God, neither were thankful, but became vain in their thoughts, and their foolish heart was full of darkness. When they professed themselves to be wise, they became fools . . . without natural affection.” – Romans 1:20-22, 30b (1599 Geneva Bible)

As a South African citizen living abroad for about three years, I often get inquiries from interested parties concerning the situation of the Afrikaner-Boer people in South Africa. Internationally, a lot of people are hungry for knowledge concerning the contemporary state of the white minority in South Africa, especially amid the complete lack of truthful information provided by the mainstream media. Some of my more pleasant personal experiences in these conversations have been that a surprising number of people are themselves generally unsurprised, as well as sympathetic towards the Boers in South Africa, when hearing about the ongoing genocide. Only on a few occasions have my paths crossed with those extreme leftists who believe whites deserve what they’re getting because of apparent historical injustices. Nonetheless, despite the sympathy, most still see the way forward to a peaceful South Africa not through healthy, biblical ethnonationalism, but by intensified cultural Marxist, egalitarian convictions in the minds of the people. That this strategy is based on false presuppositions and is therefore unworkable has been explained and proven innumerable times here on Faith and Heritage. Nonetheless, although unacceptable, it remains to be expected from a Western society infiltrated and ideologically dominated by cultural Marxism since the 1960s. Among those people I come across who do actually hold to the biblical view of race and nationhood, I’ve noticed that one of the most surprising and astonishing facts for these right-minded people is when I mention that a majority of whites in South Africa have to a great extent embraced the cultural Marxist worldview. They rightly suppose that isolation from the global propaganda machine up until 1990 (thanks to apartheid) and – based on the results of studies elsewhere – that decades of experiencing life as a white minority in a third-world African country should be enough to make at least a race-realist of every white South African.

The latest opinion polls conducted by the South African Reconciliation Barometer tell a rather different story, however:

Although it is undoubtedly encouraging to see that a majority of white South Africans (at least as of 2013) still disapprove of miscegenation – especially in our era with its insane drive for political correctness – another even more recent study in 2014 suggests that over 60% of young white college students approve thereof.2 Given that most whites in South Africa actually attend college (partially because affirmative action policies incite whites to aspire for overqualification), the current status quo does not bode well for the future of our people. Combine this with the growing trend among some of the most popular and influential Afrikaans celebrities to abuse their fame to launch “anti-racism” campaigns, and it becomes a very bleak and confusing picture indeed.

Although when compared to some Western European countries, these statistics would probably still look encouraging, one has to add that, especially in light of the government’s unashamed institutional discrimination against white people as well as the current genocide being committed, they still at first seem inexplicable. However, when viewed in relation to other tendencies evident from recent opinion polls, they start to make more sense, as I will continue to explain.

Consider that during the late 1980s, 92% of Afrikaners were still members of Reformed Churches; church attendance is estimated to have been well over 80%. A very recent poll conducted among Afrikaners (February 2015) shows that those claiming to attend church on a weekly basis had dropped to 38%. The same poll also showed that opposition to abortion and homosexuality among Afrikaners had dropped to all-time lows of 57% and 46%, respectively.3 All of this points to bigger factors contributing to the contemporary identity and ideological development of white South Africans than merely first-hand experience with the creational laws as manifested in nature. This brings us back to the text quoted from Romans 1 at the start of this piece.

The apostle Paul, writing to the faithful congregation about legal righteousness before God acquired through faith in Christ as Lord and Saviour (1:16-17), then elaborates on the gravity of the issue by relating to God’s righteous judgment and wrath upon the unrighteous sinners who are outside of Christ (vv. 18-32). Paul starts off by pointing to the overarching epistemological flaw committed by the unrighteous due to their sinful nature as the root of their sinful lifestyles and worldviews (v. 18). For the sake of reiterating its importance, he also repeats this in verses 25 and 28. Pointing out the universality of natural revelation, he continues to say that all humanity is without excuse regarding the gospel’s call to repentance (vv. 19-23). The apostle continues to explain that because of this epistemic suppression of truth and willful ignorance regarding the Source of all truth, God has given the unrighteous over to their uncleanness and their vile passions (vv. 24, 26a). Hence when a people or culture hardens itself against God, in due time he withdraws his restraining grace, by which he in certain circumstances limits the full outworking of total depravity in the lives of sinners. By releasing a people from his restraining grace to more deeply fall in sin, judgment upon them of course also increases accordingly. In the Old Testament, one of the finest practical examples of this (albeit in the case of an individual) can be found in God’s dealings with the Egyptian Pharaoh Thutmose III, who refused to grant liberty to God’s people (Ex. 7:3; 9:12; 10:20). Paul also refers back to this in his stunning exposition of sovereign grace in Romans 9. Nonetheless, the Old Testament also bears witness of this Divine modus operandi in God’s dealings with nations (Ex. 20:5; Ezek. 15).

In his rhetorically Hellenistic paraenetic listing (vv. 26b-31) of the sins into which an apostate or degenerate people fall when God releases them to their vile passions, the apostle includes sodomy, fornication, wickedness, covetousness, maliciousness, envy, murder, deceit, choosing of the side of evil, whispering, backbiting, proud boasting, hating of God, inventing of evil things, disobedience to their parents, lack of understanding, covenant-breaking and mercilessness. Towards the end of verse 31 he also includes a sin which in the original Greek reads αστοργους, which the Geneva Bible and King James version rightly translate as “[being] without natural affection.” The a-prefix in the Greek serves a negating function prior to the word “storgé”, which literally means “love of kindred.” Paul therefore explicitly lists alienism as a fruit of a degenerate society.

What the opinion polls like these among Afrikaners (and the entire West) reflect regarding changing views and norms on miscegenation, sodomy, abortion, etc. is therefore nothing else but God’s bringing about of his infallibly promised judgments on apostate peoples who have suppressed the divine truths revealed to them and their ancestors. Sadly, it seems to quite often be the case that, as the attacks on our people’s religion and culture intensify, resistance actually wanes even further. This illogical paradigm of continuing paralysis can only rightly be understood and explained in terms of God’s purposeful judgments upon apostate nations. We can, however, take comfort in the fact that God’s judgments are indeed purposeful, nonetheless, for we can and must always hope that through judgment God will, in due time, raise up a godly generation from among our people again. In the meantime one can only pray that the current age in Western history, characterized by its degenerate zeitgeist, comes to a swift end.