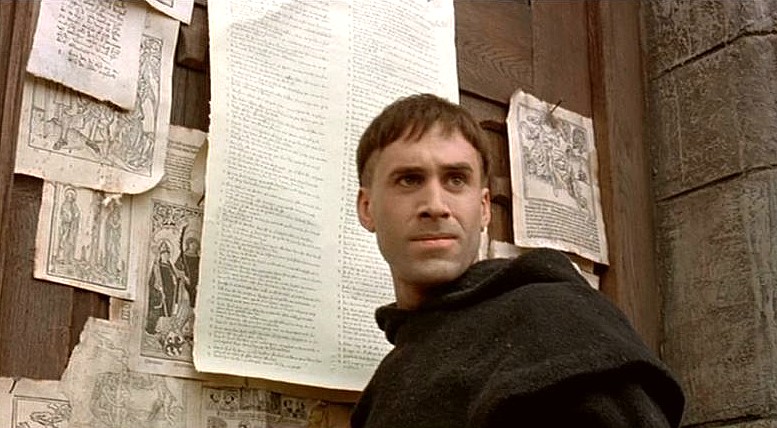 One week before an historic presidential election in which nearly two thirds of white Americans made an openly nationalistic, anti-Third World, pro-European leader the 45th President of the United States, the Western world quietly commemorated the 499th anniversary of the Protestant Reformation.

One year from now, we’ll be celebrating the 500th anniversary of Martin Luther’s pivotal, and daring, 95 Theses. Luther’s bravery began a sequence of events that liberated northwestern Europe and North America from Roman rule and anti-biblical religion.

In a similar way, we hope and pray that our president-elect honors his promise to put “America First” and elevates the historic American nation — white people — to our rightful place as lords in our own castles, and rulers of our own country. Not too long ago such a thing seemed unimaginable. And yet here we are.

With pro-globalist leaders such as the Southern Baptist Convention’s Russell Moore, Jr., movements such as the PCA’s anti-white “racial reconciliation” overtures, of which more than 40 have been passed (including one as recent as this June) and the widespread Zionist, “Israel First” dispensationalism that pervades most conservative churches, is it possible that we heirs of the Reformation will ever see Protestant churches in our communities free of the tyranny of anti-white, anti-male political correctness?

It is truly akin to what Luther faced in the early 1500s.

Most people are familiar with the basics of his 95 Theses, which opposed the papally-sanctioned practice of indulgences — convincing people to pay money in return for forgiveness of some of their sins, thus reducing the number of centuries that they would need to burn in purgatory before entering heaven. The money collected from sales of indulgences went to pay for St. Peter’s Basilica in Rome.

Bad as that was, that was not all. For centuries, the Roman church had bilked its non-Italian subjects for large sums of money. Want a priest in your village? Pay up. Want a bishop who actually tends to the spiritual needs of the community? Pay more. Want an archbishop whose time and attention isn’t divided between multiple, hugely expansive archdioceses? We might be able to do that — for a very large fee.

Nobody should object to having to financially support the men who minister God’s Word and sacraments to them; that is a biblical command per 1 Corinthians 9. However, that’s not what the Vatican was demanding of Luther’s German countrymen. The money wasn’t only going to pay for the clergy’s salaries and expenses. Large portions went straight to unnecessary, lavish expenses racked up by the popes and their cliques in Rome.

Luther’s objection to the practice of indulgences was grounded both on his belief that Christians should not be forced to bow their consciences to unbiblical doctrines, and on his conviction that his countrymen — his flock — was being extorted, oppressed, and abused by foreigners.

From Luther’s To the Christian Nobility of the German Nation:

What is the use in Christendom of the people called “Cardinals”? I will tell you. In Italy and Germany there are many rich convents, endowments, fiefs and benefices, and as the best way of getting these into the hands of Rome, they created cardinals, and gave them the sees, convents, and prelacies, and thus destroyed the service of God. That is why Italy is almost a desert now: the convents are destroyed, the sees consumed, the revenues of the prelacies and of all the churches drawn to Rome; towns are decayed; the country and the people ruined, while there is no more any worship of God or preaching; why? Because the cardinals must have all the wealth. No Turk could have thus desolated Italy and overthrown the worship of God.

Now that Italy is sucked dry, they come to Germany and begin very quietly; but we shall see, that Germany is soon to be brought into the same state as Italy. We have a few cardinals already. What the Romanists mean thereby the drunken Germans are not to see until they have lost everything—bishoprics, convents, benefices, fiefs, even to their last farthing. Antichrist must take the riches of the earth, as it is written. (Dan. xi. 8, 39, 43.)

They begin by taking off the cream of the bishoprics, convents, and fiefs; and as they do not dare to destroy everything as they have done in Italy, they employ such holy cunning to join together ten or twenty prelacies, and take such a portion of each, annually, that the total amounts to a considerable sum. The priory of Würzburg gives one thousand guilders, those of Bamberg, Mayence, Treves and others also contribute. In this way they collect one thousand or ten thousand guilders, in order that a cardinal may live at Rome in a state like that of a wealthy monarch.

After we have gained this, we will create thirty or forty cardinals on one day, and give one St. Michael’s Mount, near Bamberg, and likewise the see of Würzburg, to which belong some rich benefices, until the churches and the cities are desolated; and then we shall say: We are the vicars of Christ, the shepherds of Christ’s flocks; those mad, drunken Germans must submit to it.

If you’ve never heard this idea before, let it sink in: the Protestant Reformation started as an attempt to Make Germany Great Again.

The parallels between Luther and Trump are few. No one would argue that Trump is contending for the supreme authority of Scripture, as did Luther. But in their unshakable resolve to throw the yoke of a foreign oppressor off the necks of their countrymen, Luther and Trump stand as one.

Five hundred years later, can we revive Luther’s Reformation? Can we white American Christians throw out the globalists, anti-white bigots, and cuckservatives from the evangelical churches?

Can we Make Protestantism Great Again?