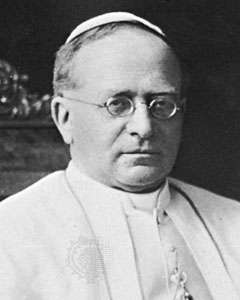 Mit Brennender Sorge, translated as With Burning Concern, is a 1937 encyclical published by the Italian Pope Pius XI. Published in German, the pope expresses his concerns regarding the policies of Hitler’s party in Germany.

It is addressed in particular to the leaders of the Roman Catholic Church in Germany and starts off by sympathising with their difficult position in Germany at the time. The document laments, for example, that despite being guaranteed freedom of Roman Catholic education through a concordat signed with the German government in 1933, church schools were being pressured to close.

Apart from concerns about religious liberty, the document continues to lament the rise of neo-pagan ideas, and especially pantheism, both inside and outside the church in Germany – due to the propaganda of these religious ideas by radical members of the Nazi party. The document condemns those who practice a form of pagan-Christian syncretism as anathema.

The second condemnation of the encyclical not only relates to the role of the state, but also speaks to race and nation. The document reads:

Whoever exalts race, or the people, or the State, or a particular form of State, or the depositories of power, or any other fundamental value of the human community – however necessary and honorable be their function in worldly things – whoever raises these notions above their standard value and divinizes them to an idolatrous level, distorts and perverts an order of the world planned and created by God; he is far from the true faith in God and from the concept of life which that faith upholds.

While the Pope here rightly condemns idolatry of the state, race, nation, or any other sphere of human existence, it is worthwhile to note his explicit recognition of their intrinsic value. He does not advocate the abolishing of the institution of the state itself, for example, when he condemns its exaltation “above standard value”. The statement itself presupposes the positive existence of a standard value (and function) for the state, as well as race and nationhood. In the 1930s the anti-Nazis were nothing at all like the contemporary SJW anti-racists that currently strive to make our societies unlivable. Mit Brennender Sorge recognizes the “order of the world planned by God” in relation to the existence and functions of race and nation – a clear positive appreciation of both.

This is followed by an admonition that all nations and rulers everywhere are to obey the Word of God without exception and that a state or party has no right to elevate itself above this level. The commandments of God are called the “necessary foundation of all private life and public morality,” such that “to hand over the moral law to man’s subjective opinion, which changes with the times, instead of anchoring it in the holy will of the eternal God and His commandments, is to open wide every door to the forces of destruction.” One of the examples listed in the desecration of Sunday as a day of rest, which the document notes is also opposed to the best German traditions.

It continues to condemn the idea of a non-universal national religion by which a god is bound only to one particular people. An evident shortcoming of the encyclical is that it fails to elaborate on this particular condemnation, however, and omits any positive recognition of the uniqueness of the different cultural expressions of true Christianity among different nations.

The document thereafter defends the Old Testament as divinely inspired against some German heretics who wanted to do away with it. It defends the role of the church in a healthy society over against the overreach of the state. This includes, however, a classic Roman Catholic defense of the “primacy of the Bishop of Rome.”

The document is superb in its recognition of “the joyful and proud confidence in the future of one’s people” as an “instinct in every heart.”

The document concludes its discussion on the issue of race and nationalism with a clear articulation of its understanding of the place of nationalism in Christianity:

No one would think of preventing young Germans establishing a true ethnical community in a noble love of freedom and loyalty to their country. What We object to is the voluntary and systematic antagonism raised between national education and religious duty. That is why we tell the young: Sing your hymns to freedom, but do not forget the freedom of the children of God.

With regard to the discussion of race and nationhood, Mit Brennender Sorge is not without its flaws, but is valuable as a solid expression of the Christian understanding of this issue.