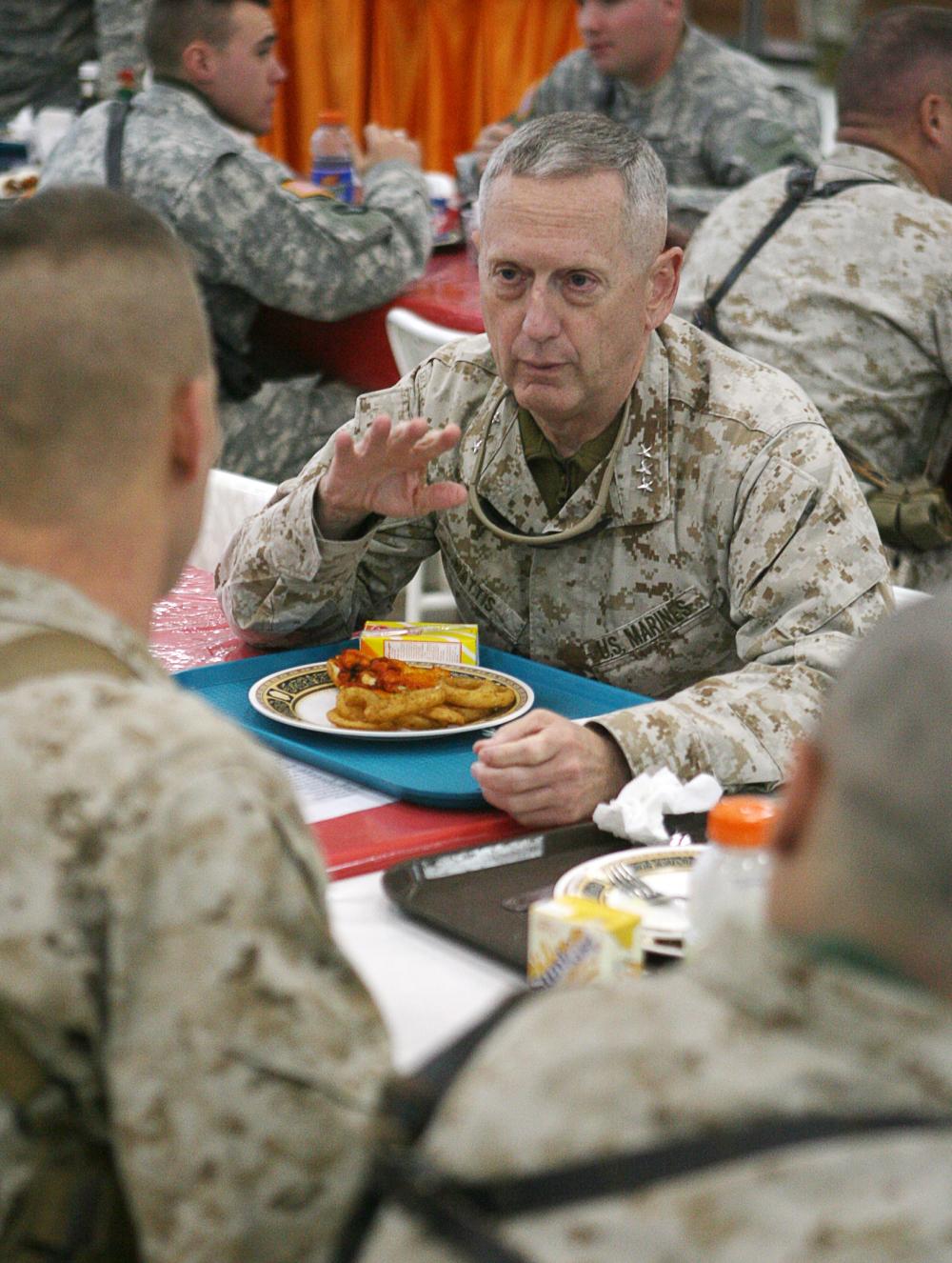 Love him or hate him, Donald Trump’s pick for secretary of defense, Gen. James Mattis, gives plenty of reason to evoke strong reactions to his nomination.  But which reaction is more consistent with the reality of the man’s life?

The four-star U.S. Marine Corps general with a 44-year-long career in the military has offered some real gems during his tenure that are the stuff of lore on the left and right alike.

Be polite, be professional, but have a plan to kill everybody you meet.

He told liberal Washington Post writer Thomas Ricks that this was one of his philosophies while Ricks was embedded with U.S. military units in Iraq in the early stages of the war there. Ricks later wrote Fiasco, a scathing account of the 2003-2005 war in Iraq and followed it up with The Gamble, a sequel about U.S. Army Gen. David Petraeus’s 2006-2008 “Surge” strategy which Petraeus implemented as commander of all U.S. forces in Iraq.  Petraeus is currently in the hunt for the Secretary of State job in the Trump Administration.

Mattis dropped his most-controversial quote while partaking in a 2005 panel discussion about the war against the Taliban in Afghanistan:

Actually it’s quite fun to fight them, you know. It’s a hell of a hoot. It’s fun to shoot some people. I’ll be right up there with you. I like brawling. You go into Afghanistan, you got guys who slap women around for five years because they didn’t wear a veil. You know, guys like that ain’t got no manhood left anyway. So it’s a hell of a lot of fun to shoot them.

These remarks earned him a gentle but public rebuke from then-Commandant of the Marine Corps, Gen. Michael Hagee, and likely cost him the opportunity to become commandant himself.

Whether it was red-blooded Christian men, or humanist liberals at the Pentagon and in the press, who objected to Mattis’s sentiment about killing Islamists is up to the reader to decide.

What people may not know is that Mattis is a scholar of war who has earned the nickname, “Warrior Monk,” and was reported by Ricks to carry around with him a copy of Roman Emperor and Stoic philosopher Marcus Aurelius‘s Meditations.

Mattis opposed Bush-era Secretary of Defense Donald Rumsfeld’s insistence upon technology and special forces over classical military thinking. “Computers by their nature are isolating. They build walls. The nature of war is immutable: You need trust and connection.” He dismissed the net-centric emphasis as “a Marxian view — it ignores the spiritual.”

Not surprisingly, then, was his advice to Marines at war against insurgents in the al-Anbar province of Iraq in 2004. Adding to the famed “No better friend, no worse enemy” tagline of the Marines, Mattis instructed his Marines to engage with Iraqis according to the principle, “First, do no harm,” which is part of the Hippocratic corpus which instructs doctors in ethical treatment of their patients.

He was also part of the Marine Corps writing team that worked with Petraeus and Army writers to create FM 3-24/MCWP 3-33.5 in December 2006. Also known as the Counterinsurgency Manual, this primer indoctrinated U.S. military leaders and enlisted alike with how to engage Iraqis with the goal of winning their hearts and minds — not just blowing them away.  Mattis instructed his Marines to practice small but meaningful gestures such as removing one’s sunglasses to talk to Iraqis, and growing mustaches to better bridge the cultural divide between the clean-shaven U.S. troops and bearded Islamic men.  Mattis had led the successful 2003 invasion of Iraq as commanding general of the First Marine Division and was recalled to al-Anbar Province in 2004 to quell the rising insurgency.  Even after four American contractors were killed, burned, and hung from a bridge in Fallujah, “Mad Dog” Mattis continued to prefer to spare lives and negotiate with local sheiks than simply destroy everything in his path.

As Mattis said during his speech at the Marine Corps University Foundation’s 2014 Semper Fidelis Award Dinner on Feb. 22, 2014, “It’s all the more important today that we hold to our precious legacy of ferocious, ethical combat performance.”

Marines who can do the necessary ‘rough work,’ but without becoming evil by doing so, despite an enemy who has opened apocalyptically the aperture for who they target, to include even women and children. . . . It’s all the more important today that we hold to our precious legacy of ferocious, ethical combat performance. For in a world awash in change, Americans need to have confidence in the everlasting character of our Marines.