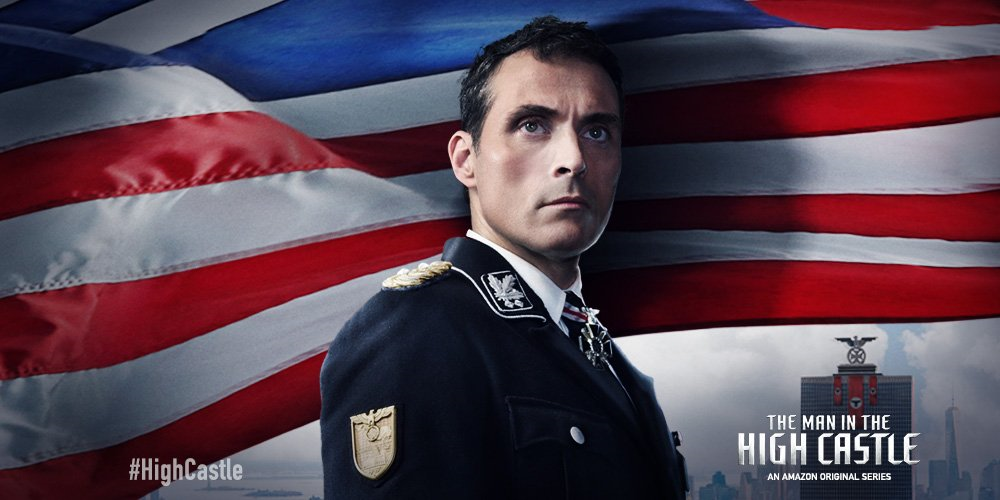 The Man in the High Castle is a trap disguised as entertainment. The premise of the story is that the Axis won World War II, and the former United States of America is occupied by the Japanese on the Pacific Coast and by the Nazis in the Midwest, Northeast, and South, with the Rockies constituting an ungoverned buffer zone. Within that alternate world are mysterious film reels from a second alternate world where the Allies won the war, but in a different manner than they did in our real world.

Amazon’s original adaptation of the 1962 Philip Dick book for consumption by television audiences went over well three years ago when it first came out. Advertisements for the show in the New York City transit system drew ire from all the right places, and had to be withdrawn. The show’s first season followed the book of the same name more than during its second season, which seemed like it was created out of whole cloth by the producers at Amazon. Who knows what its third season will entail, but Amazon has released a video clip thus far, and the shows are scheduled for release sometime in 2018.

Keep in mind that the fact that this show is about Nazis running the world is nearly irrelevant. It could be about 19th-century British imperialists, 18th-century American pioneers, or 11th-century Viking raiders, and the show’s dynamic would remain the same. What this show is really about is a world with rules and expectations contrary to those in place during our era of American history. This is reinforced every time the show’s anti-Nazi so-called Resistance talks about their ideology or culture. These allegedly normal Americans always hearken back to degeneracy, black culture, sexual liberation, and 1960s-style nonconformity as the epitome of Americanism.

The fact that tens of millions of Americans don’t agree with that assessment is what makes the show a trap for normies. There are some who watch because they are attracted to the taboo topics of Nazism and World War II revisionism, but there are probably far more who watch because they want to imagine a world where cross-dressing is still regarded as a mental illness, where we have objective standards for beauty, where strength and integrity aren’t equated with publicly professing one’s homosexual inclinations, and where patriotism means keeping foreign-looking people out of your country instead of making them fellow voters. However, while constantly thwarting the viewer’s desire to see normalcy defended as normal with subpar, soap opera-like plotting, the bigger problem with the show is its portrayal of one of the show’s main characters.

Oberstgruppenführer John Smith began the show as the evil Nazi antagonist of the show’s female lead character, Juliana Crain. Between them is a naive, undecided Nazi double agent named Joe Blake who infiltrates the resistance on behalf of his Nazi boss, Oberstgruppenführer Smith. In the show’s first season, Smith led an outwardly normal life complete with white picket fence, well-manicured lawn, classy wife, and three well-behaved kids. However because the show presented him as foul-mouthed and a genuine sadist who had turned on his fellow Americans by becoming a leading Nazi, his outward presentation as the nice guy next door came off as hypocritical or psychopathic. As our own W.M. Godfrey noted in his treatment of the Left’s use of alternate history vis-à-vis The Man in the High Castle in a previous article here at Faith and Heritage, this white hat vs. black hat kind of drama was nearly unwatchable.

In the show’s second season, the writers took a different turn with Smith, and I think it’s even more dangerous for normies. They made Smith’s only son a cripple. They introduced this bright, self-disciplined, but shy boy as showing early signs of muscular dystrophy. In the show’s parlance, the Nazi officer’s son was defective and merited euthanasia. They even showed the family doctor call Smith into his office, explain the situation, and hand over a do-it-yourself euthanasia kit so Smith could lethally inject into his son a poison that would dispatch him relatively painlessly, in the comfort and privacy of the family home. Truly horrifying.

Like any normal parent, that medical advice did not go over well with Oberstgruppenführer Smith. Though he never said anything contrary to the doctor, he eventually lured him into a second private meeting where Smith used the euthanasia kit on the doctor — and then had his body cremated after the funeral so his curious widow couldn’t request an autopsy. Smith shut up his own wife when she began to inquire about the family doctor’s mysterious death, by assuring her that everything he did was to protect his family. He never defined what he had done to protect his family, in order to ensure plausible deniability. It was a loving, masculine message that she accepted with feminine trust. She knew that he had murdered the family doctor, but she also knew that her son would have otherwise been the one murdered by the state if Smith had not acted first. The willingness to kill to protect your child’s life is innate across mankind. Ergo, while at the same time showing Smith to still be ruthless towards his enemies, it showed him tender towards his family, and thus more sympathetic to normies. This was different from the first season.

Also in the second season, the show portrayed Smith not as a sadist but as a moderate. In the show’s universe, Nazi radicals led by Reinhardt Heydrich plotted to assassinate Adolf Hitler in order to launch a new world war against the remaining rival power in the world — the Japanese Empire. The show portrayed Heydrich’s clique as dissatisfied with the Hitlerian world order due to its toleration of the Asian superpower, which they look down upon due to their race, culture, and technological inferiority. In the show, the Nazis are atheistic and have supersonic jets and the atom bomb, but the Japanese practice I Ching and Eastern mysticism and still rely on steamers, lacking any nuclear capabilities. Smith resists these radicals who want to wage a gigantic nuclear war that would cost tens of millions of Japanese and American lives. Also, Smith doesn’t curse in the second season. He doesn’t show pleasure in torture. He does murder one of Heydrich’s allies who had become aide-de-camp to Smith, but this is because he knows that Heydrich planted him there in order to spy on or even kill Smith. It was business, not personal. In all, the net effect of the second season was to change Smith from a mindless, genocidal maniac who had a nice family and green lawn to a thoughtful, intelligent political force willing to break his own government’s laws in order to protect his family, and who protected millions of innocent lives that would have been lost in a needless nuclear war.

I have no doubt that this show will exist only so long as it serves a useful purpose for our anti-white, anti-Christian, feminist enemies. Thus far, this Amazon show has worked hard to define a Nazi as a normal-looking, honest, patriotic white person who has a heterosexual love life, wants or has children, lives according to traditional gender roles, and works hard. Some of the show’s Nazis wear SS uniforms like Smith, but most of the Nazis in the show look just like you and me. And that is the trap. This show is making an effort to pigeonhole every normal-looking white person in America as a Nazi. In the first place, it’s not true, since most members of even the Alt Right (let alone the larger white population) do not accept the tenets of national socialism. More importantly though, you know how the culture thinks Nazis should be treated. (Think: Slow, painful death.) By humanizing Smith and giving viewers a reason to care about him and his family during the show’s second season, the show’s producers and writers have expanded the definition of Nazis-worthy-of-extermination from “genocidal maniacs who live like it’s the ’50s” to “otherwise nice racially-proud white people I care about.”