On Sept. 4, Attorney General Jefferson Beauregard Sessions III announced that the Trump Administration would phase out the Delayed Action for Childhood Arrivals program in six months. DACA is a program granting amnesty to illegal immigrants who arrived in the United States as children. If Congress wants to act to provide legal grounds for these criminals to stay in the United States, they can. President Trump is even encouraging, or daring, them to do so. He has previously said he “loves” the so-called “dreamers.” But, on solid legal ground, the administration will terminate the program which former President Barack Obama invented out of thin air, with not a lick of constitutional authority behind it.

Trump’s decision to end DACA is good. The odds are slim that Congress will pass a bill to grant amnesty in six months. The onus is on the pro-illegal immigration crowd to get the job done. Usually it’s the other way around, like during W. Bush and Obama’s administrations, when we patriots had to fight to get Congress to stop the executive branch’s agenda. It’s always easier to divide a parliamentary body and grind it to a halt, than to unite that parliamentary body and accomplish something. Someone famous once pointed out this and other weaknesses of the system of parliamentary democracy.

The lugenpresse will of course spend the next six months turning all the emotional thumbscrews until your mom and grandma are screaming bloody murder by Christmas time. “Oh how can you send them back when it’s Christmas!” Tell that to the troops in Afghanistan, who would love to be home this Christmas. Or the families whose kids won’t be in college or employment this Christmas because those “dreamers” took their seats and jobs.

When the DACA termination deadline approaches on March 5, 2018, the howling will be audible. But even louder than the howling of SWPL pain will be the chants and threats by mestizos against pro-American, pro-Trump gringos.

So Mr. President, I offer for your consideration this picture. It’s a photo of several of your political enemies at a protest in support of DACA. *Full credit to the AP photographer who took the photo, linked to the AP article here. 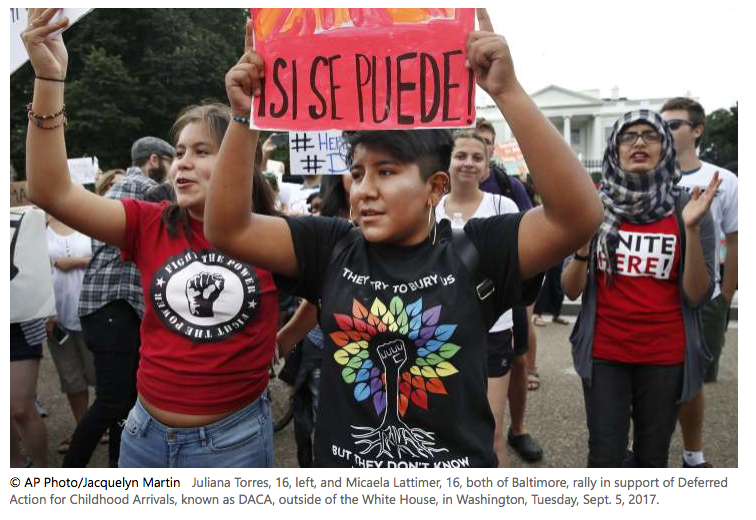 What do you notice about these people?

Take a look at the first two on the left. Juliana Torres, 16, is wearing a Communist t-shirt that says “Fight the Power.” Her look and her message is neither original nor beautiful. Micaela Lattimer, also age 16, is holding some sign with an Obama slogan, and wearing a Communist t-shirt that quotes a Mexican proverb, “They try to bury us. But they don’t know we are seeds.” That proverb is pure revanchism. That proverb threatens one’s enemies with eventual and total destruction — and a hint of moral superiority. Did I mention that it is Mexican, and that her sign is en español? How do you think she would vote to treat English-speaking gringos if her kind takes over the country? How do you think Torres would vote to treat the “privileged” whites whom she had to “fight” for so long? Let’s hearken back to the Alamo to consider how Mexicans treat conquered enemies. Or how the Comanche and Aztecs dealt with their enemies.

Take a look at the person to Lattimer’s right, the one with the makeshift hijab. Based on the chest, I think that’s a female — but like Lattimer’s butch-short haircut and straight-off-the-rez earrings, the person is not a female we’d recognize in our society as beautiful or normal. Unsurprisingly, that Muslim or Muslim wanna-be is wearing…a Communist t-shirt. Commies must make a killing on those shirts.

Sprinkled in the photo are random white or whitish people. Clearly they were not the favored members of the “coalition of the ascendant” that the AP photographer and globohomo media want to focus on. Look at the expression on the face of the whitish girl just over Lattimer’s left shoulder. She has an expression that says, “I can’t wait to be sacrificed by this Indian!” as she smirks at the photographer beaming Lattimer’s anti-white image across the world to millions of adoring SWPLs and ravenous Third Worlders.

Needless to say, Trump voters have no desire to be consumed by the Third World masses at the ballot box, in their neighborhoods, or at the wrong end of a weapon. We voted for Trump last November because he promised to build a wall and deport them all (or at least nearly all). We’d like the president to keep his promises. If he doesn’t, the reality is that in 2020 we’ll keep a promise of our own: to not reward sellout Republicans with our votes. It’s not a threat, it’s a guaranteed fact. It’s a fact that is going to devastate the Republican majorities in the House and Senate in 2018. Yes, we the people have noticed that there is no wall, no Obamacare repeal, no end of stupid meddling wars overseas, and no large-scale deportations. In November 2018 we will punish the turncoat Republicans who have brought that about. The Democrats will roll like they did in 2006. Trump has one year of a Republican majority left, and then he will be negotiating with Pelosi and Schumer for the rest of his term.

The same thing will happen to the president in 2020 unless things change — radically. Not even war with North Korea, Iran, or Russia would prevent this. Of what significance is war abroad when faced with invasion at home? We elected Trump to retake the White House for white Americans. We don’t expect a white nationalist administration necessarily, but we do expect one that protects white people at least as well as it protects other people lawfully, ethically residing here. DACA rewards criminality. Even if Congress threw together an amnesty package for the criminals temporarily sheltered by DACA, Trump should not sign it into law, because it would just be slapping a veneer of legality over an obviously immoral and illegal act. Just like Trump’s failed predecessors.