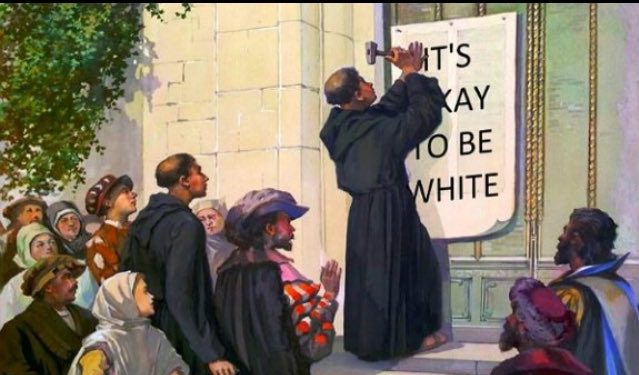 In a 1989 Easy Chair discussion, R.J. Rushdoony and Otto Scott noted that all sins were being whittled down to one: racism, a concept about which they expressed no small doubt. More than dubious, their critique of this trend revealed a genuine contempt of the concept. Because, as presuppositionalists, they glimpsed the foreign assumptions and anti-Christian ethical system back of this idiom. But even they saw this as through a glass, dimly.

Now, these men were my betters so I do not imagine myself more insightful than they. I’m only living at a period when both the fruit and seed of this tree are more evident. Let us count the ways:

1. The intent of one accused of racism is besides the point.

Yes, because racism is not any particular act like murder, rape, or theft; it was sold to us as a sinful attitude like covetousness or unbelief. Hatred based on race, to be specific. But non-Whites uniformly condemn that idea.

Your Granny McGee may harbor no animosity toward Blacks, but the consensus is her vintage Pickaninny doll collection is nonetheless racist. And any argument to the contrary is seen as only compounding guilt.

Meanwhile, an enterprising Black seamstress is stitching “Positive Energy Dolls”, “Empowerment Dolls”, and even “Pickaninnies” by name that are indistinguishable from the old Golliwog dolls, and her wares are met with aplomb. Her Pickaninnies aren’t racist because she’s not White, you see. Attitude doesn’t bear on the matter in the least, only the race of the person involved.

And though White folks attempt constantly to anchor the concept of racism to an attitude of maliciousness regarding race, all other races assure us, that perspective itself is vicious White Supremacy, and of course deeply racist.

2. Belief or disbelief in the existence and meaningfulness of races is irrelevant too.

Of course, when a White admits the obvious – that races are real and meaningful – he will be pilloried as a racist, but really, no less so than if he denies their existence and meaningfulness. On this point, it really doesn’t matter which option you choose, candor or egalitarian fairytales, as both are deemed by minorities (and SJWs) equally heinous. There is no lady behind either door, only tigers.

The monolithic non-White perspective is that tolerance-mongering Millennial SJWs are no less racist than any other generation of Whites! “For I tell you that unless your anti-racism exceeds that of Antifa and the diversity officers of Columbia University, ye shall in no case enter into the Kingdom of Antiracism.” (Marx 3:16)

Conversely, all other races affirm the reality and meaningfulness of race unreservedly, but are, to everyone’s estimation, exempt from the indictment of racism nonetheless. So racism is not determined by belief at all.

3. Literally everything White people do, or don’t do, is racist.

By now everyone knows the National Anthem is racist. But did you know artificial intelligence and binary computer algorithms in general, are racist?

Studies consistently find babies to be racist. And it’s racist for White people to have babies. So having a White family is obviously racist. Yes, wanting the best for your family is racist. Even preserving your child’s innocence is racist.

Which brings us to the fourth point…

As much as cucked conservative types want to object to this point and exonerate themselves of the charge, it is the monolithic consensus of minorities. Really, it is. So there’s not even a way for a White to object to this definition without opposing the fundamental conviction of basically all non-White people, and the Democrat portion of Whites, besides. And that adversarial stance toward minorities is deemed no less racist than simply affirming race realism from the outset.

White folks’ common reaction to being called a racist is to ask for proof that they personally have done something racist, but this is to entirely miss the point. Racism is not an action, or a thought process, but a socio-ontological status. And when Whites question that, to the eyes of minorities, we only prove our guilt the more. And because they see that denial as the hallmark of guilt itself, it only antagonizes them.

At law, because minorities are already commonly excused for assaulting Whites who offend them in some way, we’re rapidly approaching a circumstance where in the case of even murdering Whites, Blacks and others may not be charged with anything beyond aggravated assault. Because Whiteness is its own aggravated circumstance. And the case has already been decided in public sentiment among non-Whites that attacking and even killing Whites at random is actually just self-defense on the part of minorities. Under our legal circumstances, if you can’t foresee where this is heading, you’re a fool.

5. All Whites will always be racist.

Because no matter what definition of the concept is assumed, you cannot prove a negative. So to grant the concept as legitimate leaves no exoneration possible. And our accusers find any denial or defense on our part all the more offensive and deserving of punishment in itself.

6. If everything is racist, nothing is.

This was, in some measure, the point of A Conversation About Race: therein Craig Bodeker underscored the fact that racism is taken as real in spite of its being defined in so many mutually exclusive ways as to render it meaningless.

Sure, the majority take for granted the category as real, but if everyone’s definition thereof contradicts itself and everyone else, it becomes unquantifiable.

7. The very term ‘racist’ (or ‘racism’) is just a euphemism for White Christendom.

The history of the word is a bit shrouded, but we do know it originates either with Leon Trotsky or someone in his camp about the late 1920s; and it didn’t come into wide usage until the 60s!

From the outset, the term was invoked against Western Man’s love of family, faith, folk, and fatherland. Which is to say, the word ‘racist’ (or racism) was simply a term of condemnation against our traditional Christian virtues. The injection of this Marxist terminology literally introduced an inverse ethic which recast all our old virtues as utmost vice. The introduction of this word and its presuppositions “declared good evil, and put light for darkness” (Isa. 5:20-21).

Needless to say, anti-racism certainly wasn’t normative to historic Christianity. Up until the 1960s Christians popularly had no word in our lexicon for such a concept, for the simple reason that we had no such concept. In spite of its prominence today, anti-racism simply wasn’t part of Christian theology and ethics until Trotskyites (atheist communists) convicted Christendom of violating the ethics of humanism and converted the West to that foreign ethos. Nonsensical though it be.

Since the charge of racism is unquantifiable, internally contradictory, and meaningless as an indictment of sin, all accusations thereof are straw man arguments. We are literally being accused of a crime that does not exist. Racism does not exist. It is a ruse; a hobgoblin of the mind; a golem conjured by word magic for one express purpose — to destroy Christendom.

But the Christian man is obliged to “cast down imaginations, and every high thing that exalteth itself against the knowledge of God, and bringing into captivity every thought to the obedience of Christ.” (2 Cor. 10:5)

This is the great spiritual battle of our age. Fight.